Apple showed the included sheet on yesterday's WWDC with information on iOS 6. It says "IPv6 Support for Wi-Fi and LTE" in the right lower corner (right below the blue logo).
Let's analyze that:

IPv6 accounts for 40% of all traffic by IPv6 customers

The result is that there are now 13.000 IPv6 leases (read: customers with IPv6 active). Together they generate 1.6 Gbps IPv6 peak traffic. That means a mean of 123 kbps IPv6 traffic per IPv6 user at the peak moment (normally at 21:00 for consumer connections).

How can that huge amount of IPv6 traffic be explained? I can only guess: youtube.com, newsserer/newsgroup traffic, facebook.com, a bit google.com, and ...?
Peer2peer traffic like bittorrent is unlikely do cause a lot of IPv6 traffic at this moment as very little "peers" have IPv6 working right now.

Hopefully Xs4all will do an analysis of the type of IPv6 traffic, and report on it.

If your ISP, like mine, has blocked access to http://www.thepiratebay.org/ , but you have IPv6, there is an easy solution: http://thepiratebay.se.ipv6.sixxs.org/

Update (based on the comments):

If you update your 'hosts' file, you can just access http://thepiratebay.se/ over IPv6. The Dutch ISPs block IPv4 addresses, not IPv6 addresses.

Then restart your browser (or whole OS), and happily surf to http://thepiratebay.se/

This probably also works if you have only teredo / miredo IPv6 (which is active in all Windows Vista and Windows 7 systems).

Probably handy to have this in your hosts file:

Cool: this blog itself IPv6 enabled

Today is IPv6 Launch Day. Among others, Google has turned on IPv6 on its websites: google.com, youtube.com, and ... blogspot.com. So this blog http://ipv6-or-no-ipv6.blogspot.com/ is now IPv6 enabled.

Nice site to check IPv6-ness of a domain

Here's a nice site to check the IPv6 results for a certain domain: http://ip6.nl/
At this moment (one day before IPv6 Launch) google.com has zero score:
http://ip6.nl/#!google.com 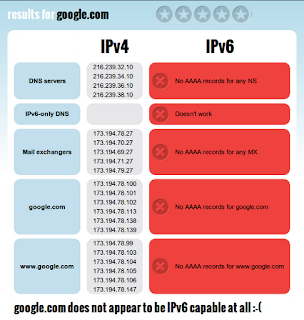 I'm running Ubuntu 12.04 with Linux 3.2.0. I just saw that "ip -6 route show" shows an enormous list of IPv6 addresses. After some research, it looks all IPv6 address that are used (by a webbrowser or any other program), get added to that list. The entries have a short life: after a few minutes, they're gone (if not re-visited). Maybe it's just a list of active IPv6 connections?

I had a look on my Ubuntu Server 11.10 (with Linux 3.0), and there the ipv6 route list just shows the usual default gateway and the local LAN addresses, and not all the IPv6 sites visited. So it's a change between Linux 3.0 and 3.2?

I don't know why that is done. Does it make IPv6 network communication faster? If so, why is it not done for IPv4 ("ip route show" does not show sites visited)? Or is it used to keep parameters for each destination (like the cwnd at the end: cwnd = "clamp for congestion window")?

Anyway: Apart from the official goal, how can you (mis)use this feature? Some thoughts:

IPv6 route table on my system:

Info from Iljitsch van Beijnum https://twitter.com/#!/iljitsch and http://www.muada.com/ : the above is "route cloning". Info from an IBM site:


Route cloning
Route cloning allows a host route to be created for every host that a system communicates with.

When network traffic is about to be sent, a search is done of the routing table to find a route to that host. If a specific host route is found, it will be used. If a specific host route is not found, a network route or the default route may be found. If the route that is found has the cloning flag, 'c', set, a host route for the destination will be created using the gateway from the route that is being cloned. Subsequent routing table searches for that destination will find the cloned host route. Cloned routes have the 'W' flag set. These routes will time out and be deleted from the routing table if they are unused for route_expire minutes. You can modify route_expire by using the no command.

The route cloning feature is used mainly by the path MTU discovery protocol within AIX® to allow it to keep track of path MTU information for every destination it communicates with. If the network options tcp_pmtu_discover or udp_pmtu_discover (settable with the no command) are 1, the cloning flag is turned on for all network routes on the system. In AIX 4.3.3 and later, path MTU discovery is on by default.