Based on the measurements from Worldipv6launch you can see the status of IPv6 in the Netherlands of the two biggest ISPs KPN and Ziggo (October 2016):

Hacked together in one overview with KPN in orange and Ziggo in red: 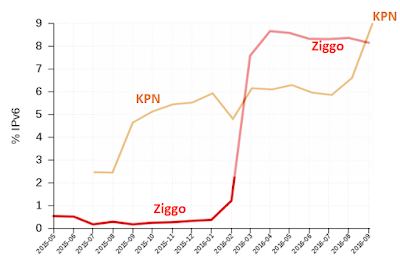 I had IPv6 on my Ziggo Ubee modem since 2014, now the modem died and I get a shiny new ConnectBox, and - surprise - no IPv6! Customer support basically told me to go away (twice).
Well guess what? I am going away.